Sei is working on a new Gunpla for use in the World Tournament. But, anxious about whether it’s safe to keep it “as is,” he has fallen into a kind of slump. When China unexpectedly ends up in a Gunpla Battle tournament limited to female players, she distracts Sei from his worries by asking him for Gunpla Battle advice. Thanks to intensive training by Sei and Reiji, China and her Gunpla, (Mr.) Beargguy III, begin piling up victories in the women-only tournament. Only one person stands in her way: Caroline Yajima, an art-contest veteran who considers herself China’s rival. China finds herself in peril when she faces the Gunpla that Caroline has built.
Very cute BearGuy gundam ^_^ 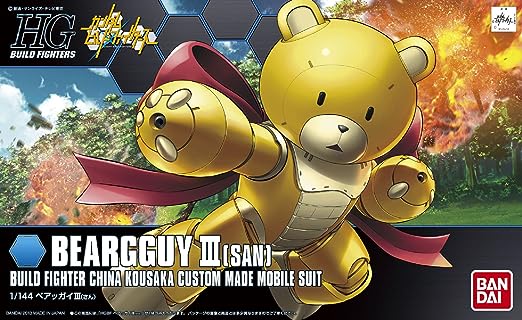 At the series The KUMA-03 Beargguy III is a custom mobile suit appearing in Gundam Build Fighters and is a variant of the GPB-04B Beargguy. Its Modeller and Pilot is China Kousaka.China’s customized gunpla, it is a modified HG GPB-04B Beargguy. Since China is in the art club, her painting skill is high, giving it an elegant and cute look. Like the original Beargguy, Beargguy III also has 3 beam cannons and 2 extendable arms. However, the beam cannons are placed in somewhat different locations and 2 of them are capable of generating beam sabers. The Beargguy’s landcell unit is also replaced by a hardpoint connector, which is normally mounted with the custom ribbon striker.