Sei, Reiji, and Mao have been chosen to participate in the Gunpla Battle Championship World Tournament. Meanwhile, outside Japan, a series of qualifying tournaments have been underway in other countries to select players for the World Tournament. Among them are Ricardo Fellini of Italy, Luang Dallara of Thailand, and the Renato brothers of Argentina. Fellini’s rival Greco Logan, a World Tournament veteran, is considered the favorite to represent America. But an unexpected ambush awaits him in the final round of the qualifying tournament. When the young prodigy Nils Nielsen, known as the Early Genius, reveals the hidden power of his Gunpla, the Sengoku Astray, it will shake the arena… no, the world!
A world class tournament veteran defeated by 13 years old kid the early genius. Wow that is amazing. Samurai Gundam with hidden and special technique, i think Sengoku Gundam Astray Red is one of the best Mobile suit in this series. 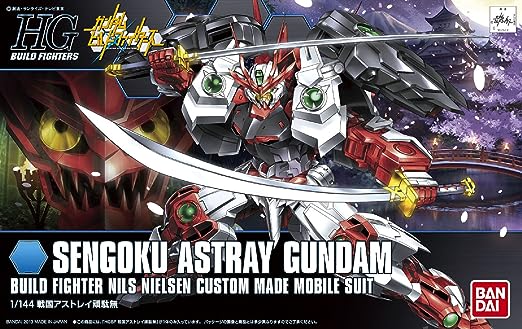 The 侍ノ弐 Sengoku Astray Gundam is a variant of the MBF-P02 Gundam Astray Red Frame and appears in the anime series Gundam Build Fighters. The Gunpla is built and controlled by Nils Nielsen.
Based on the MBF-P02 Gundam Astray Red Frame that appeared in the Astray series, the Gunpla built by Nils Nielsen embodied his preference to his Japanese Heritage. Aesthetically, it greatly resembles a Samurai, with an enlarged V-fin that is modeled after the Crest-horn and additional facial scrupling that is modeled after a men. The Red Frame’s original faceplate is hidden underneath this extra plating and can be revealed if the extra plate is destroyed. The unit is armed with two swords and a shield, and has been uparmored, with the new shoulder armor containing a pair of hidden arms. The shoulder armor also has thrusters located at the back. In the hands of Nils, an expert on both Japanese martial arts and anti-particle research, Sengoku Astray can launch Sword-Ki(刀氣) attacks in addition to cutting through beam attacks and particle barrier. The unit also has a special melee attack, the ‘Particle Fa Jin’, that allows it to destroy an opponent from within.
Toys List Sengoku Gundam Astray