Before the decisive battle with Tatsuya Yuuki, Reiji once again goes in search of combat practice, while Sei concentrates on fine-tuning the Build Strike. China is becoming concerned that Sei is too engrossed in his work. Then, a mysterious boy named Mao Yasaka appears before the two of them. Having won the Japanese 5th Block, he has already earned a place in the World Tournament, and he says he has come to the store because he is interested in Sei, a highly skilled builder who is the same age as he is. Mao has only one goal: to determine which of them is superior as a Gunpla builder. Sei accepts his challenge, and Sei and Mao bring out their Gunpla, the Build Strike and the Gundam X Maoh. As soon as they see each other’s work, Sei and Mao find themselves adrift in
Mobile Suit That Appear ni this episode
X – Maoh Gundam 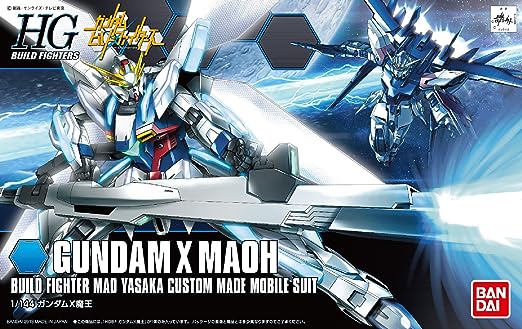 The GX-9900 Gundam X (aka Gundam X, GX, X) is a mass-produced mobile suit built by the former United Nations Earth in After War Gundam X. There are two feature versions of Gundam X. The primary featured one was piloted by Garrod Ran and later to Jamil Neate. It was later badly damaged in combat and was repaired and rebuilt as GX-9900-DV Gundam X Divider.
The second one was featured in the manga sequel, After War Gundam X: Under the Moonlight. The story featured a different Gundam X (adorned with teal colors) and its pilot was Rick Aller.
Click the text for the toys detail:
Bandai Hobby #03 HGBF Gundam X Maoh Model Kit (1/144 Scale)

Look really cool right ^_^.. Maoh Vs Sei,what about you?can you build a better gunpla then maoh or sei..Why don’t you try to build one. See you in the next episode.thank you for watching here,don’t forget to click like..