Sei and Reiji have now witnessed the overwhelmingly superior power of Tatsuya Yuuki’s Zaku Amazing. To prepare for the day when he’ll face Yuuki again in the championship, Sei secludes himself in his workshop to complete the Full Package equipment for his Build Strike. Meanwhile, Reiji goes out into the city at night and heads for a certain place—a store where men with years of Gunpla experience meet night after night to fight battles. Reiji challenges the men just for the sake of combat practice, and easily defeats his opponents. But then Ricardo Fellini, an Italian Gunpla battle fighter, appears before him! And on the day of the championship, Sei has somehow completed the Build Strike, but Reiji is nowhere to be found…
Here is the toys that appear ini this episode 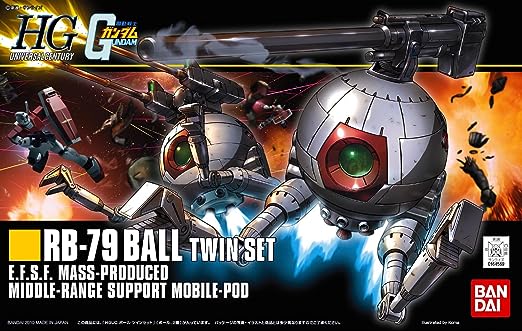 Technology & Combat Characteristics
The Federation refitted about 1200 of the civilian-model worker space pods, known as SP-W03 Space Pods. The Federation reinforced it with heavier armor and mounted a 180mm recoil-less cannon on top. The Ball mobile pod also had vernier thrusters mounted all along the body.
A standard EFSF combat team would consist of 3 RGM-79 GMs and 2 Balls to counter Zeon’s 3-MS tactical units, though other formations have been seen; Ball-only teams of 1 RB-79K and 2 RB-79 launched from a Salamis-class cruiser, and various large formations launched from Columbus-class ships.
Disclaimer:
All images and videos here are property of their respective owners and used for reference purpose only. We claim no rights to it unless otherwise stated.
Product prices and availability are accurate as of the date/time indicated and are subject to change. Any price and availability information displayed on this site at the time of purchase will apply to the purchase of this product.