As the second match of the tournament quarterfinals approaches, Meijin Kawaguchi’s opponent is changed. The new fighter’s name is Julian Mackenzie, and Kawaguchi and Allan are terrified to hear this name. At the Gunpla school that Allan and Tatsuya Yuuki once attended, Julian was the top student, whose Gunpla building techniques and control abilities were said to be closest to those of a Meijin.Julian ability was higher than Tatsuya Yuuki in the past,with no win rate from Tatsuya Yuuki when battling with Julian. It Is time to proof that Meijin title is belong to Tatsuya Yuuki. 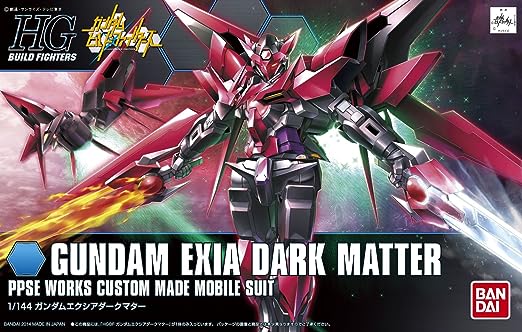 Origin GN-001 Gundam Exia
The GN-001 Gundam Exia (aka Gundam Exia, Exia, Gundam Seven Swords), is the close combat Gundam featured in both seasons of Mobile Suit Gundam 00. The unit is piloted by Setsuna F. Seiei.
A 3rd-Generation Gundam, Exia is designed to be a close quarters combat (CQC) type mobile suit (MS). The unit is the successor to GNY-001 Gundam Astraea and one of the predecessors to GN-0000 00 Gundam.

Much of Exia’s design was heavily influenced from the Astraea Gundam. What this means is that even though Exia’s weapons are specialized for CQC, its basic performance is still that of a general purpose mobile suit.This is mostly evident as Exia is the only Gundam out of the four main 3rd Generation units that retain a MS frame that has human-like range of motion.The lack of this range of motion on the other three units is not considered a weakness but rather because it was deemed unnecessary.
Toys review+detail(click it)