As the World Tournament finals begin, Sei and Reiji find that their opponent in the first round is Mao Yasaka. When they met in Tokyo, they swore to fight in the World Tournament, and now that promise will finally be fulfilled. But Mao senses a threat from the Star Build Strike, which was more than an even match for Fellini. With Sei’s rapidly advancing building skills, and Reiji’s control technique, he is likely to lose. Desperate to win, Mao goes to visit Master Chinan of the Gunpla Shingyo school of modeling arts and ask to be taught new secrets. On the day of the battle, a worn-out Mao appears before Sei and Reiji. Now begins a life-or-death battle between the Star Build Strike and the Gundam X Maoh..
Just do whatever you like,nice ^_^..Never quit,build and build more.
Aile Strike Gundam 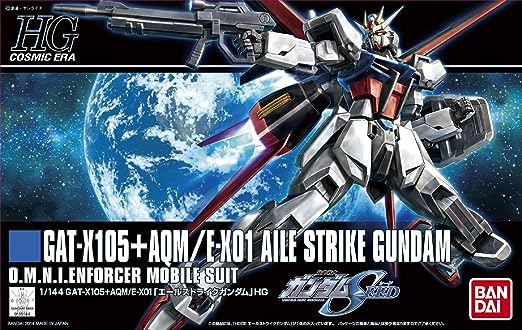 GAT-X105+AQM/E-X01 Aile Strike is a prototype high mobility Mobile Suit, it is featured in Mobile Suit Gundam SEED. Its primary pilot was Kira Yamato before it was passed down to ace pilot Mu La Flaga.
Technology & Combat Characteristics
The AQM/E-X01 Aile Striker is the most commonly equipped Striker pack for the Strike as it provides the greatest versatility. Thanks to the powerful vernier thrusters built into the Aile Striker, the Strike becomes an all purpose combat mobile suit with enhanced speed and maneuverability compared to its base capabilities. Despite the strength of the thrusters, they do not perform well enough to give the Strike true flight capabilities inside Earth’s atmosphere. However, they do allow the Strike to glide in the air for a short time and enhance its jumping capabilities to the point that it can combat mobile suits on Guuls that are flying low. Besides the standard armament of the GAT-X105 Strike (which include head-mounted CIWS guns, combat knifes, a beam rifle and a shield), the Aile Striker pack adds an additional pair of beam sabers to the armament of the suit.