Sei and Reiji have no choice but to win their next battle. But their opponent in the final period turns out to be the Italian champion Ricardo Fellini, who has been undefeated up through the seventh period. Whatever the results of this last qualifier, his qualification for the tournament finals is already decided. Now Fellini wonders whether he should give Sei and Reiji their victory, and preserve his own machine, by deliberately losing, or…? With mixed emotions, Fellini confronts the Star Build Strike.
Very Great battle from Felini and Sei,Felini give no mercy although he had made to final tournament. Sportive participants.
NMX-004 Qubeley Papillon 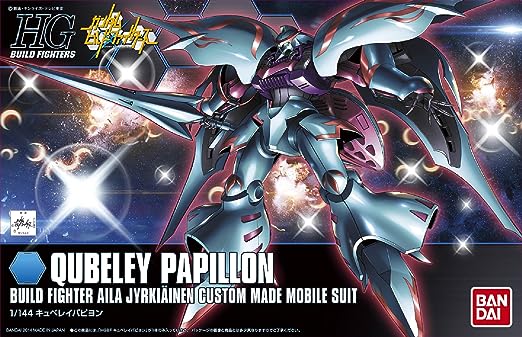 The NMX-004 Qubeley Papillon is a custom mobile suit appearing in the anime Gundam Build Fighters, and is a variant of the AMX-004 Qubeley. The Gunpla is built by Nemesis and primarily controlled by Aila Jyrkiäinen.
Technology & Combat Characteristics
The customized gunpla of Aila Jyrkiäinen, a member of the Gunpla team Nemesis hailing from Finland. The Qubeley Papillon is heavily derived from the AMX-004 Qubeley of Mobile Suit Zeta Gundam and Mobile Suit Gundam ZZ with its overall design and aesthetics overhauled and modified, making it resemble a knight. The unit is equipped with 2 types of funnels, a handheld lancer bit and 2 beam sabers that can also function as beam guns. One of the signature abilities of the Qubeley Papillon is its usage of invisible funnels, allowing it to destroy its enemies without any apparent motion, giving the illusion that simply approaching it causes opponents to explode. The unit is used together with a special control suit that is equipped with the Embody System, which can improve its performance greatly but has negative effects on the fighter.
Toys review and detail

Disclaimer:
All images and videos here are property of their respective owners and used for reference purpose only. We claim no rights to it unless otherwise stated.

Product prices and availability are accurate as of the date/time indicated and are subject to change. Any price and availability information displayed on this site at the time of purchase will apply to the purchase of this product.