The tournament has reached its sixth period, and only two periods now remain. Sei and Reiji have earned a good point score, and are working their way into the top group. Then the seventh period begins, with the announcement of a Gunpla Race. This is literally a speed race, where fighters compete for position during three laps of a special course constructed inside the arena. Sei’s and Reiji’s Star Build Strike uses its Discharge System to make an amazing starting dash. It looks like they’ll finish the race in the lead, but Baker, the secretary of PPSE’s Chairman Mashita, has prepared a huge trap in the special course. The Star Build Strike is headed for danger!
How embarasing the chairman doing some dirty stuff to make Reiji and Sei lost in this Gundam race battle. How annoying that appear zeeong that stop the speed of Gundam build strike.
MSN-02 Zeong 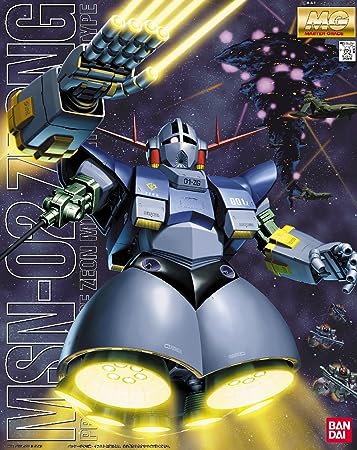 The MSN-02 Zeong (aka Zeong, mistranslated in dub as “Jiong”) is a prototype mobile suit developed by the Principality of Zeon at the A Baoa Qu space fortress during the One Year War of the anime Mobile Suit Gundam, the Zeong was built especially for Newtype
pilots and was first piloted by the “Red Comet” Char Aznable.
Technology & Combat Characteristics
The final product of the MS-16X “Bishop Plan”, the Zeong was a mobile suit in the fact that it features a roughly humanoid shape. However, it lacked legs, which first surprised its pilot. Although it was only 80% complete, it didn’t matter in gravity-lacking space, since the legs aided in the Active Mass Balance Auto Control or AMBAC System. Because of that factor it was at 100% combat capacity when first used.
The Zeong was the first mobile suit to use Psycommu system. This let it effectively use its wire-guided, remote-controlled arms, each built with 5-mega particle gun fingers. Two additional beam guns were built into the torso. Lastly, there was a single beam cannon inside the head. Unlike the mobile suits of the time, the Zeong had its cockpit built in the head, which could detach from the body and act as an escape pod for the pilot.