During the final battle of the World Tournament’s first day, a PPSE works team entered the tournament, thanks to the sponsor’s special rules. The name of its fighter is Meijin Kawaguchi, and Sei and Reiji are certain that another friendly rival has appeared. Meijin Kawaguchi = president Yuuki,the president of gundam play battle at Iori school,he is the eternal rival for both of Reiji and Sei.
The tournament then enters its second period, a Battle Royal elimination match among all the players. An enormous diorama unfolds, and more than 80 Gunpla begin a fierce battle. Sei and Reiji attempt to survive the battle by teaming up with Mao and Fellini, but a huge shadow is creeping up on them… There is a preemptive strike from a gaw attack carrier,he bring a lot of friend to take revenge, because Felini was stole their girl friend.
wow at the end appear Zaku zilla or zaku monster.It is very huge. omg.
PPMS-18E Kämpfer Amazing 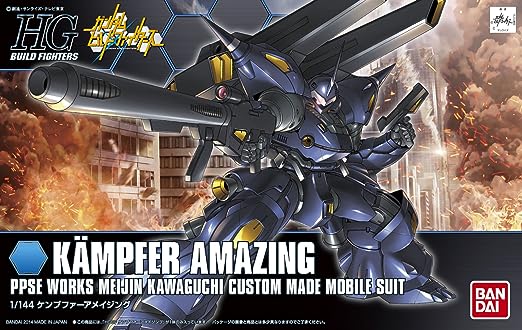 The PPMS-18E Kämpfer Amazing is a mobile suit from the Gundam Build Fighters anime series and a variant of MS-18E Kämpfer. The Gunpla is built by Plavsky Particle System Engineering (PPSE) and primarily controlled by Meijin Kawaguchi.
Technology & Combat Characteristics
Meijin Kawaguchi’s customized Gunpla developed by the PPSE, the Kämpfer Amazing is a variant of the Kämpfer that first appeared in Mobile Suit Gundam 0080: War in the Pocket and has been redesigned from the ground up to meet his needs. The suit has high polycaps in all joints and is coated in emotion paint. Weapon wise, the Kämpfer Amazing is equipped with a pair of knives, a pair of beam sabers and eight heat plates on its limbs. In order to boost its performance, it is often equipped with the Amazing Weapons Binders, which not only contains additional weapons, but also contains thrusters to boost the Gunpla’s movement. Usually a pair of these binders are attached to the back, but additional binders can also attach to the legs. What weapons are stored within the binders are decided prior to the battle according to the predicted battle condition.
Gundam Kampfer Toys Detail