The Gunpla Battle Championship World Tournament begins. One by one, representatives from throughout the world enter the holy ground of Shizuoka. The day before the tournament begins, Reiji skips the reception party and heads into town in search of tasty food, and there he has a fateful encounter with a mysterious girl. On the first day of the tournament, the world’s top players are proclaiming themselves victorious as usual…until Aila Jyrkiäinen, who became Finland’s representative by defeating the previous World Tournament winner during the qualifiers, makes her entrance and shows the world her overwhelming strength. Then Sei’s and Reiji’s battle begins. Their Star Build Strike, a new Gunpla created for the world championship and equipped with revolutionary new systems, finally flies into the world!
wow,really cool that Sei Iory Gunpla,he can absorb beam from their enemies.It make me surprise. Sugoy ^_^.
Gundam HGBF Full Package Strike 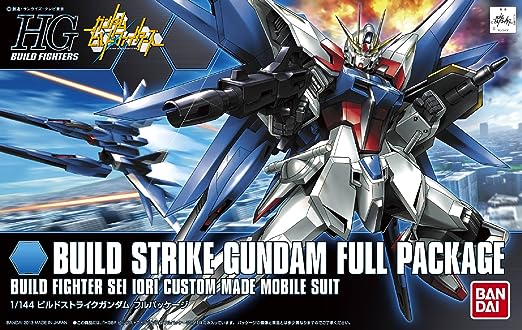 Sei Iori (イオリ・セイ Iori Sei?) is the protagonist of Gundam Build Fighters. Although his skills in Gunpla building are exceptional, Sei’s Gunpla piloting skills where lacking till over the course of the series he was able to hold his own against Reiji. Personality & Character
Sei Iori is a young boy whose family runs Iori Hobby Shop in a small town, which for yet to be explained reasons, located in a residential area. As such, the shop doubles as his family’s home. His father was a Gunpla Battle champion many years ago, and Sei has inherited his skill at building and customizing Gunpla, but not the skill and sense in piloting one. Because of this, he has Reiji pilot his Gunpla while he takes charge of analyzing the opponent to provide navigational and tactical data during battle.